New technologies, such as that used to enable high-speed connections, and capacity modelling is now being used in countries including Brazil, US, China and India in order to ensure that the world’s most populous nations are adequately equipped to cater for their burgeoning cities.

With more than 192 million citizens according to a July 2011 estimate, Brazil ranks as the fifth most populated country and contributes 2.75% to the world’s total population. With the vast majority of people living in densely populated cities such as Rio and Sao Paulo, the need to link urban areas effectively has become increasingly apparent.

A feasibility study conducted by Halcrow identified that a high-speed rail corridor linking Sao Paulo with Rio de Janeiro had an approximate demand of 33 million passengers a year.

Capable of reducing the current rail journey time of five hours to just 90 minutes, the Brazilian Government sanctioned the creation of such a rail link, whilst also announcing a much wider effort to expand the link to cities including Belo Horizonte and Curitiba.

Rolling stock plans to be added to the route incrementally, with two phases in 2014 and 2024 in order to cater for increasing demand.

Outside of connecting major cities, plans are also afoot to expand Sao Paulo’s metro system. Spread across six lines that cater for a daily ridership of approximately 3.6 million passengers, the system is the third largest in Latin America behind Mexico City and Santiago. The city’s green line will make use of a monorail, adding 17 further stations, whereas both yellow and purple lines will also see expansion and modernisation. 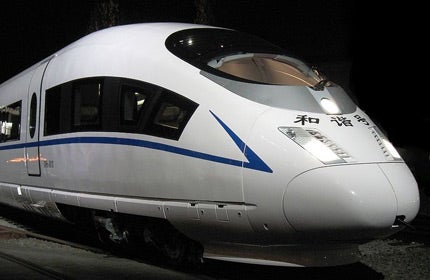 With China’s population of just less than 1.4bn people contributing significantly to the world’s total, the nation currently has some of the most densely populated areas, such as Macau, Hong Kong and cities such as Beijing and Shanghai.

Beijing-Tianjin High-Speed Commuter Link, ChinaThe Beijing-Tianjin corridor uses conventional railway technology, but is the fastest railway of its kind in the country.

As part of China’s ¥4 trillion 2008 economic stimulus package, plans to expand Beijing’s subway network, one of the busiest in the world with an annual ridership of approximately 1.84bn, were announced. An investment totalling ¥185.1bn ($29.2bn) was pledged with additional lines, improvements and capacity enhancements announced.

By 2015, seven of the 15 active lines will be enhanced, with rolling stock operating along the line also earmarked for improvements.

Outside of the sprawling and bustling cities, China has also invested significantly in linking its cities with high-speed rail links.

Opened in 2008, the Beijing-Tianjin Intercity Railway provides a passenger-only service linking the two cities in just 30 minutes, with a daily ridership now estimated to be around 69,000.

Elsewhere, China’s two largest cities Beijing and China have been connected via a 1,318km high-speed rail link capable of ferrying passengers between the two cities in less than five hours. Constructed at a cost of approximately ¥83.7bn, the line’s first commercial service ran on 30 June 2011, and the line now has an expected daily ridership of 165,000.

The US learns to love high-speed rail

Although the US has historically neglected its rail network, preferring to develop its air and road transport options, the country’s population has gradually come to embrace the advantages of travelling by train. With ridership numbers breaking records year after year, national intercity rail operator Amtrak is looking to make major investments into its infrastructure to keep up with demand.

"An $8bn injection as part of the Federal Government’s 2009 stimulus package is accelerating US high-speed development."

Amtrak’s network, which covers all US states except Wyoming and South Dakota, carried around 30.2 million passengers in 2011, another ridership record.

Despite being arguably the world’s most developed country, the US has so far lagged behind on the development of next-generation high-speed rail concepts.

The only route in the US that approaches the modern high-speed standard is Amtrak’s Acela Express service along the Northeast Corridor (NEC) between New York, Boston and Washington DC, although on large sections of the line trains are limited to just 68mph because the high-speed service uses the same tracks as conventional rail.

An $8bn injection as part of the Federal Government’s 2009 stimulus package is accelerating US high-speed development. As well as Amtrak’s plans to improve speed and capacity on the NEC by upgrading tracks and other infrastructure, a major plan to introduce high-speed rail to California is underway.

The proposed line will eventually run from San Diego in south California up to San Francisco and Sacramento in the north, allowing speeds of up to 220mph.

The finished line, expected by 2033, will cut travel time from San Francisco to Los Angeles down to just more than two and a half hours for a projected annual ridership of 91 to 95 million passengers. The economic benefits of this project, which the California High-Speed Rail Authority predicts will include the indirect creation of nearly half a million permanent jobs, could pave the way for other US high-speed initiatives in Florida, the Pacific Northwest and throughout the Midwest with the proposed Chicago hub network.

"The new Delhi monorail, which will have 12 stations and interchange with three existing Metro lines, is expected to come online by 2017 and serve around 150,000 passengers a day."

As India’s expanding middle class continues to prosper and gain more economic and geographical mobility, the Indian Government is spending huge sums to ensure the country’s rail network meets its users’ expectations. Thousands of miles of track need to be laid down to improve service and to link some of India’s more remote regions with the rest of the country.

At the beginning of 2012, the Indian Government announced a further $3.5bn of funding for the Udhampur-Srinigar-Baramulla rail project, which aims to provide better rail services to and from Jammu and Kashmir, India’s most northern state. The project, which is due for completion in 2017, has thrown up some massive engineering challenges, not least the 11km section of the line that passes through the Pir Panjal mountains – a tunnelling project that took more than six years to complete.

Indian Railways also recently begun work on the $843m Rishikesh-Karanprayag line in the state of Uttarakhand, a 125km track that is intended to speed up travel for the hundreds of thousands of pilgrims who travel to the myriad temples and other religious sites in the area.

As is so often the case in India’s northern regions, the mountainous terrain is a challenge. The project involves the construction of 81 tunnels, 19 of which will be more than a kilometre in length. The line, which is due for completion in 2016, is expected to halve the journey time between Rishikesh and Karanprayag from eight hours to just four.

India’s densely populated cities are not getting left out of the government’s rail plans. In-principle approval for a new $327m monorail extension to the Delhi Metro was announced in January 2012, demonstrating the country’s commitment to decongesting urban areas and encouraging the flourishing economies of India’s massive hub cities.

The new Delhi monorail, which will have 12 stations and interchange with three existing Metro lines, is expected to come online by 2017 and serve around 150,000 passengers a day.

As well as establishing new lines and extensions, the Indian Government is also looking to provide better servicer on its existing lines. Indian Railways’ plan to upgrade from DC to AC power on its Western Railway network will allow trains to travel faster and with greater frequency without any capacity concerns.