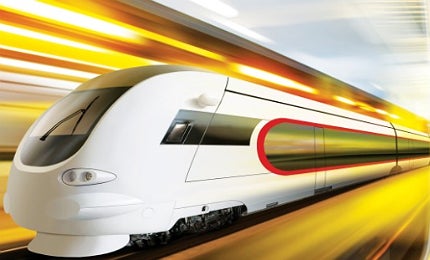 Last month the rail industry’s Enabling Innovation Team (EIT), which was set up to accelerate the uptake of innovation in the industry, launched the Radical Train project to seek radical ideas to change the future of railways. Since the 13th March, companies and individuals have been asked to submit their game-changing ideas to Frazer-Nash Consultancy, who is managing the project on EIT’s behalf.

"We are looking for the future, the next generation and even a generation beyond that."

Once submitted, entries will be narrowed down and, if deemed appropriate, consortiums formed to build a radical train demonstrator, encompassing the best ideas the industry has to offer. The final product will be half funded by the EIT, with the other half funded by companies or individuals.

Business manager for Rail at Frazer-Nash, Richard Jones, is managing the project and has said the response from the industry so far has been extremely encouraging. With one week left still to go until the 3rd May closing date, Jones details exactly what the project is looking for, and explains why the UK rail industry desperately needs this forward thinking approach to rail innovation.

Heidi Vella: What kind of innovations is the Radical Train project seeking?

Richard Jones: We’re looking for ideas to make a radical step forward – so, we’re not looking for an evolution or amendments to today’s trains – we are looking for the future, the next generation and even a generation beyond that. So the time frame is five to 30 years ahead.

Technically we are not putting boundaries on this at all, but we are using some of the guidelines that are out there in the industry already, such as the Rail Technical Strategy, which was published in December last year. It sets some tough but achievable goals for the industry.

HV: Please explain more about these ‘tough but achievable’ goals.

These are guidelines, we’re not trying to produce any particular thing, we are just looking for genuinely innovative ideas that are going to help the industry in a longer time frame move towards solving these really challenging goals.

HV: Is this the first competition of its kind in the UK industry?

RJ: I think rail has a bit of a reputation for being closed from other industries in the past, so I feel the whole feeling around this project is that it is open to cross industry in-put and we have seen people from the automotive industry are already involved, and we want to see more for sure. So I think that is one way in which it is different.

"The outcome of this project is not going to be a report or a document, the output is going to be some hard objects."

Well, history in the UK shows there has been quite a lot of research that has gone on, but it’s been difficult to find the funding to get those ideas to demonstrator phase. What EIT are doing is funding the innovation gap – that is its target – to get things from the research phase through to the mobilisation phase by providing at least 50% of the funding.

The outcome of this project is not going to be a report or a document, the output is going to be some hard objects so that these ideas can actually work.

HV: Have you had a good response to the project so far?

RJ: Yes, so far we have had interaction with more than 250 people – that’s answering questions, handing out application packs, that kind of thing.

We had a launch in London on the 21st March – only a week after the competition opened – and we had 35 people at that event, both in person and on a webinar.

HV: How detailed do submissions need to be?

RJ: At this stage it is the quality of the idea we’re looking for and we’re not necessarily looking for a huge amount of detail. So, an application comprises of no more than 500 words and if the applicant wants to add some other information, a presentation or some drawings or video or audio clip, telling us about their passion for what they want to do, that is enough at the moment. So it’s really, really easy for people to get involved.

HV: How will the finalists be picked?

RJ: We’ll be going forward with between three and seven projects. The EIT is flexible about its budget and the number of ideas it takes forward. It does depend on the quality of the ideas.

The assessment is done by a panel that is made up of EIT staff and an industry steering group, which really draws from a spectrum of groups that you would expect to have an interest in trains – trains operators, rolling stock companies and London underground and light rail industry. So we’re looking across the whole industry.

HV: What happens after the final ideas are picked?

"This is a two billion pound market, one would hope companies see a really good reason to be involved."

RJ: From June onwards the companies that still remain involved at that point will be working together to work up a full financial proposal for building one or more demonstrators.

As soon as those proposals are complete, EIT will want to start work straight away. This has been a real short, sharp programme, which is great news for everyone in the industry.

EIT will then apply their funding, 50%, and then participants will be able to fund the other half through their own business or other channels.

HV: What incentives are there for people to get involved in this?

RJ: The fact that demand goes on rising and in 30 years the UK train fleet is going to need to double in size, there will need to be something like 60,000 carriage units built over the next 30 years. Today the price for a carriage is between three quarters of a million and a million [pounds]; that’s a £60bn market over the next 30 years. So it checks out, top down to bottom up, that this is a two billion pound market, one would hope companies see a really good reason to be involved in that market.

North Londoners often joke that if south London is so great, why aren’t there more Tube stations there?