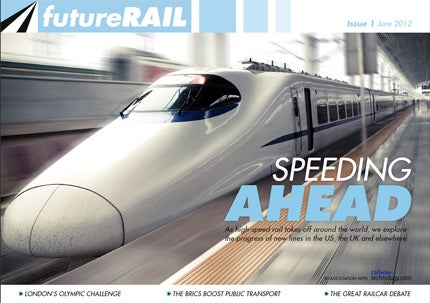 Future Rail is a new digital magazine exploring the latest news and projects, technologies and market developments in the railway industry in an exciting, interactive format.

As high-speed rail is taking off around the world, we take a look at new lines underway. We find out about California’s plan to build a $98bn state-wide high-speed network, and investigate if legal challenges could derail work on the UK’s second line, HS2. We also take a look at high-speed plans and other massive infrastructure expansion projects underway in the rapidly growing BRIC countries.

Moreover, we ask Eurostar’s about its £700m fleet refurbishment and the next-generation trains due to hit the rails in 2013, find out how London is gearing up for Olympic traffic with new and refurbished stations, and report on the growing debate over the best engine options for railcars.

Grow WestThe first segment of true high-speed rail in the US is due to begin construction later in 2012. Berenice Baker asks Lance Simmens of the California High-Speed Rail Authority about the benefits and the challenges that must be overcome to get Californians off the roads and on the rails.Read the full article.

HS2: On Track or Derailing?The UK Transport Secretary’s approval of HS2 has sparked a number of legal challenges, threatening a judicial review. Liam Stoker uncovers the issues that could throw a spanner in the works of the UK’s second high-speed rail network.Read the full article.

Handling Olympic TrafficWith only two months to go, are London’s stations ready for the 2012 Olympic Games? Elisabeth Fischer finds out how much upgrade and expansion work has gone into preparing the city’s railway system for a boom in passenger numbers.Read the full article.

Better by DesignEurostar’s £700m refurbishment is about to bear fruit with the arrival of the first new-look train in 2013. Julian Turner asks Eurostar commercial director Nick Mercer about the on-board digital revolution, the shift from air to rail, and new markets.Read the full article.

The Great Railcar DebateThe quest to find a better approach to mass transport has turned the spotlight on railcar choices. Dr Gareth Evans explores the debate over the merits of the electric / diesel-electric paradigm and whether genset locomotives and hybrid designs could offer real advantages.Read the full article.

As technology improves, more cities are opting for fully automated and driverless metro systems. We find out how removing the element of human error can help an industry keen on enhancing safety and service. We also explore the safety and security measures that have been put in place on London’s rail networks in the run-up to the Olympics.

Lower emissions and relatively inexpensive operation is making light rail an attractive option. We travel around the world to highlight key trends in light rail transit. We also find out if the once-thriving market for airport rail services is still on track, round up new ticketing initiatives that are helping passengers to move seamlessly across international lines, and uncover the latest trends in rail carriage interiors.