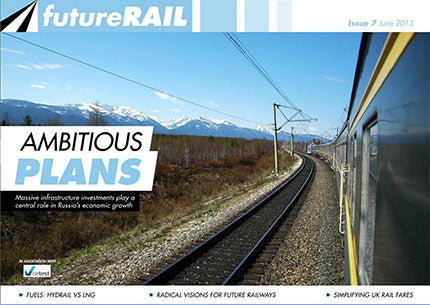 Russia has hinged a great deal of its economic ambition on the construction of a huge rail network. We find out how investment in rail infrastructure and the opening up of new transport links to Western Europe could have a massive impact in the country’s economic and political future.

We also explore innovative financing for an extension of London Underground’s Northern Line, which is set to be agreed, compare the findings of two recent UK passenger satisfaction surveys, discover what the benefits are for passengers after the UK’s Association for Train Operating Companies made its database of rail fares available and compare the latest smartphone apps for travellers.

Moreover, we profile the Radical Train Project which seeks futuristic rolling stock concepts, we explore how the redevelopment of Birmingham New Street station could help revitalise the city centre and take a look at new and eco-friendly train fuels like natural gas and hydrogen fuel cells.

Connecting a growing economy
Russia is spending billions to make its rail infrastructure worthy of its growing economy. But as many logistical challenges remain, Future Rail asks how the world’s largest country will foot the bill.
Read the full article.

Pay As You Grow
The extension of the Northern Line on the London Underground is a major infrastructure project supported by the government. Future Rail asks, will the unique funding scheme succeed in the current economy?
Read the full article.

Just the Ticket
The UK’s Association for Train Operating Companies has, for the first time, made its database of rail fares freely available. We find out what the benefits are for passengers in the long run.
Read the full article.

Travel Smart
Smartphone apps are revolutionising the way passengers access information on their rail journeys. Future Rail looks at some of the best smartphone apps for travellers.
Read the full article.

Measuring Passenger Satisfaction
Two recent UK surveys have presented seemingly contradictory reports on UK passenger satisfaction. We ask is the British public satisfied with its rail service or not?
Read the full article.

Transforming Birmingham
As Network Rail opens the first stage of the redeveloped Birmingham New Street station to the public, Future Rail finds out how the project could help to revitalise the city centre.
Read the full article.

Future Fuels
As the industry considers possible replacements for diesel, hydrogen and LNG stand out as major contenders. We explore how the development of one short-term fuel system could lead to a sustainable long-term solution.
Read the full article.

The regular occurrence of fatal accidents at level crossings proves that this age-old safety issue remains unresolved even today. We find out if modern automation technology is robust enough to provide an answer.

We also review a recent breakthrough in fuel technology which could provide a commercially viable way to convert natural gas to hydrogen for use in locomotives, and potentially give a boost to the hydrail concept.

Moreover, we find out how human behavioural science was used to transform London Bridge station into a more user-friendly commuter hub, ask what is being done to keep under-used stations financially feasible in the UK, and take a look at new research suggesting that the air quality in underground networks could be harmful to the health of regular travellers and staff.