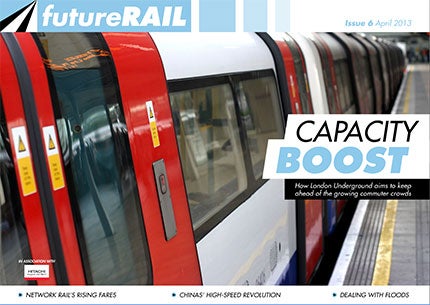 Passengers crammed onto carriages and platforms are a common sight on metros all over the world during peak commuting hours. But can the rush hour be beaten with optimised services and innovative station design? We look at some of the world’s busiest local networks to find out.

We also investigate if Network Rail‘s plan to invest £37.5bn to develop the UK’s railway infrastructure and improve service over the next five years will be enough to make up for rising fares, and examine the recent corruption allegations and safety concerns casting a shadow over China’s high-speed rail network. Moreover, we find out how rail networks are affected by heavy rains and floods and look at the processes behind reopening lines and resuming services after severe adverse weather conditions.

Beating the Rush Hour
Tackling overcrowding is a top priority for most metro network operators. London Underground‘s director of capital programmes, David Waboso explains the importance of boosting capacity on one of the world’s busiest metros to keep up with demand.
Read the full article.

China’s High-Speed Rail Revolution
While other countries still debate high-speed rail, it is already a reality in China but there are growing concerns about the safety of the high-speed rail network.
Read the full article.

Adverse Weather
Freak weather events have brought flooding and caused chaos on rail services in recent months. With such events on the rise how can a nation’s rail network be protected?
Read the full article.

Russia has hinged a great deal of its economic ambition on the construction of a huge rail network. In the next issue we find out how investment in rail infrastructure and the opening up of new transport links to Western Europe could have a massive impact in the country’s economic and political future.

We also explore innovative financing for an extension of London Underground’s Northern Line, which is set to be agreed, compare the findings of two recent UK passenger satisfaction surveys, and find out how more stringent ticketing policies and the widespread roll-out of new technology are used to combat fare dodging in Europe.

Moreover, we profile the Radical Train Project which seeks futuristic rolling stock concepts, and take a look at new and eco-friendly train fuels like natural gas and hydrogen fuel cells.

Future of the Australian Defense Industry – Market Attractiveness, Competitive Landscape and Forecasts to 2019

Future of the Polish Defense Industry – Market Attractiveness, Competitive Landscape, and Forecasts to 2019

Homeland Security Expenditure in the Australia to 2019: Market Review