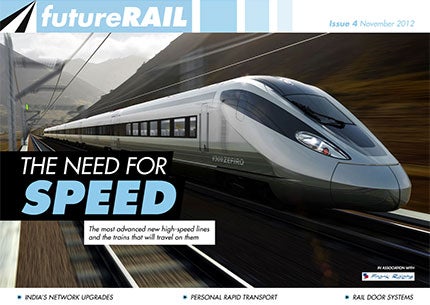 As more high-speed networks emerge and the need for railways as an alternative to road and air travel grows, new train designs must keep up with this need for ever higher speed and travel comfort. We profile some of the most impressive very high speed trains currently in development. We also find out why, despite the difficult economic climate, many developers are moving ahead with the new high-speed network and look at some of the most advanced projects of today.

Moreover, we explore India’s enormous plan to modernise its railway network, and take a look at Diabolo, the last link to be completed in Belgium’s air-rail network. We also explore a new personal rapid transport system from Vectus and Pininfarina, the firm behind some of Ferrari’s most iconic designs, and look at the best new technology for rail door systems.

Trains of TomorrowAs more high-speed networks emerge, new train designs must keep up with the need for speed. Future Rail profiles the latest generation of high-speed trains.Read the full article.

Speeding UpDespite the current economic climate many developers are moving ahead with the next generation of high-speed rail lines. We round up some of the biggest and most advanced rail projects currently in development.Read the full article.

Bumpy RideIndia’s rail system is one of the largest in the world and transports ten billion passengers every year. In March 2012, India announced its biggest railway budget in history to tackle network capacity and safety issues. We ask whether the measures will be enough to modernise the country’s railways.Read the full article.

From Air to RailBelgium’s major cities were finally connected when King Albert II opened an underground rail in June 2012. Future Rail takes a look at Diabolo, which is the missing piece of the puzzle and will allow for increased passenger capacity to the national airport.Read the full article.

Personal TransportA new personal rapid transport system from the firm behind Ferrari looks like it could change the way we travel forever. We speak to the team about this innovative vehicle design.Read the full article.

The Case for CBTCSpeaking at this year’s CBTC World Congress, Duncan Cross, deputy director of operations for Overground and Crossrail at Transport for London, explains how CBTC is being implemented in the Crossrail project.Read the full article.

An Open and Shut CaseRail door systems have to combine reliability and cost efficiency to be successful, whether they are electric, pneumatic or manual. Future Rail asks Norgren’s Mark Densley about the opportunities in this technical market.Read the full article.

As the Crossrail high-frequency network takes shape in London, we ask the developers about the challenges of designing and building new railway hubs that are set to cater to the capital’s growing passenger numbers for the next century.

We also take a look at the five busiest train stations around the world, and explore Amtrak’s $151bn vision to prepare the US Northeast Corridor for a high-speed future.

As Eurostar gets ready to roll out its new fleet of Siemens-built e320 trains, we find out which improvements they offer over the current Class 373 model. Moreover, we look at the Secure Metro project which develops blast- and fire-safe metro carriages, and ask why nationwide mobile ticketing strategy represents a new era for US rail travel.