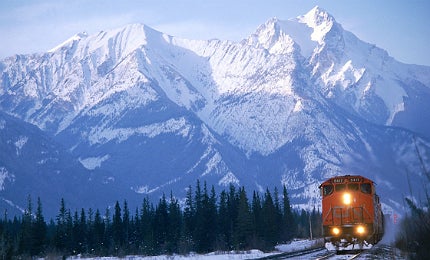 The development of Canadian National Railway’s (CN) $4.9bn new freight line and terminal handling facility for the mining industry in northern Quebec promises to be one of the largest rail construction projects in Canada.

But, as the company revealed in February, the 800km freight line will likely be delayed, as CN has suspended work on the project’s feasibility study, which it had been working on since August 2012 with mining companies Labrador Iron Mines, Cliffs Natural Resources, New Millenium Iron, Cap-Ex Ventures and Alderon Iron Ore.

CN notes that the suspension of the feasibility study is a "pause" rather than abandonment, partly prompted by major fluctuations in iron ore prices during the last year, as well as delayed projects from the mining companies that would use the line to carry ore from their operations to the Port of Sept-Iles on the Gulf of St Lawrence.

The original completion year for the rail project is 2017, but that might be unrealistic with progress being put on hold at such an early stage.

With a number of UK rail franchises in doubt after the West Coast Main Line fiasco, Transport for London’s (TfL) London Overground rail service has secured some stability with the extension of London Overground Rail Operations’ (LOROL) contract to operate the suburban rail network until 12 November 2016. After this date, the franchise will be re-tendered.

Under the £200m contract, LOROL will operate London Overground services, as well as maintain and operate the associated stations and keep the Class 172 trains on the Gospel Oak – Barking line in good repair.

LOROL, a 50-50 joint venture between Arriva and MTR, has taken London Overground "from strength to strength" since the start of its concession, according to TfL chief operating officer for rail Howard Smith.

UK rail infrastructure owner and operator Network Rail is also looking to the future, releasing in February a report on the nation’s rolling stock requirements for the next 30 years.

According to the report, 13,000 to 19,000 new units will be needed on the country’s rail system by 2042, to keep up with passenger demand levels and take advantage of wider electrification and other infrastructure improvements.

Network Rail collaborated with the Association of Train Operating Companies (ATOC), as well as train leasing companies such as Angel Trains, Eversholt Rail and Porterbrook Leasing, to produce the report, which was overseen by Eurostar chairman Richard Brown. If the UK maintains its pace with track electrification beyond 2020, more than 90% of the network is expected to be electric by 2042, creating the need for an increasingly modern rail fleet to get the most out of it.

With the contracting of Rideau Transit Group (RTG), a consortium of ACS Infrastructure Canada, SNC-Lavalin and EllisDon, for the design, construction and maintenance of the Ottawa Light Rail Transit (OLRT) scheme, the final component of this $2bn Ottawa public transport project has fallen into place.

The project, due to complete in 2017, involves construction of a 12.5km light rail line through the city from Tunney’s Pasture Station to Blair Station, including a 2.5km underground section in the city centre.

RTG plans to start work on the line’s construction in spring 2013. The project also involves the design and construction of 13 new stations, three of which will be located in the underground section.

The Mumbai Metropolitan Region Development Authority (MMRDA) is tapping into the underground metro expertise of the UK’s Transport for London (TfL) to support the development Mumbai’s own metro network.

The two parties have signed a two-year memorandum of understanding (MoU) to encourage an exchange of information, technology and personnel to help MMRDA develop and operate the under-construction Mumbai Metro.

The Mumbai Metro will eventually cover nine lines and 146.5km of track, including 32.2km of underground sections. "MMRDA and TfL can share information on construction methodologies for underground metros in densely populated areas, based on TfL’s experience of building stations such as Tottenham Court Road and Victoria," said a Maharashtra state government spokesperson.

The second phase of the UK’s controversial High-Speed 2 (HS2) rail project is moving forward into the early consultation phases.

Aecom, Mott MacDonald and Arup have all received contracts to help develop initial concept engineering designs, prepare demonstrations and carry out environmental assessments for the project’s second phase consultation, which is scheduled to begin later in 2013.

Aecom will provide engineering services for the Birmingham – Manchester arm of the proposed high-speed network, while Mott MacDonald will do the same for the project’s Birmingham – Leeds stretch. Arup, meanwhile, will carry out environmental impact assessments for all works under HS2’s second phase.

Etihad Rail is undertaking the construction of the UAE’s first national freight and passenger rail network, which will span 1,200km, linking the country’s seven emirates. The entire network will cost an estimated $11bn, with the first of the project’s three phases involving the construction of a 264km line connecting Shah and Hasban to Ruwais.

Financing for the completion of this phase, it was announced in February, is coming via a five-year loan secured on a club deal basis from the National Bank of Abu Dhabi, Bank of Tokyo-Mitsubishi UFJ, Abu Dhabi Commercial Bank and HSBC Bank Middle East.

The second phase of the project will see a 628km rail line built between Mussafah Port, Khalifa Port and Jebel Ali Port, and the third phase involves the construction of a 279km line connecting the Northern Emirates. With the first batch of railway wagons delivered to the UAE by contractor China South Locomotive & Rolling Stock in December 2012 and locomotives set to arrive in Q1 this year, Etihad Rail is confident that the first phase of the project will be ready to launch by the end of 2013.

2013 kicked off with some big news for the rail industry, including the opening of high-speed lines in China and Spain, as well as the planning of new lines in the US and the UK.