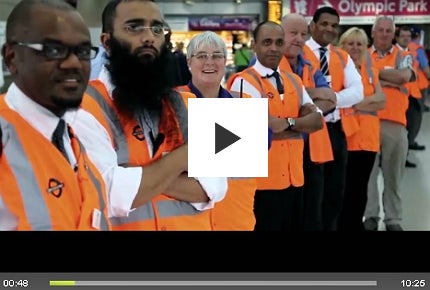 Throughout London’s long period of preparation for hosting the 2012 Olympic and Paralympic Games last summer, the city’s public transport network was marked as an area of particular concern. Although London’s bid won out over its rivals, the International Olympic Committee noted in its official evaluation that an aggressive programme of public transport improvements would need to be "fully delivered on schedule before 2012" if the city was going to be "capable of coping with Games-time traffic".

"More than 62 million journeys were made on the Tube during the Olympics, a jump of 35%."

Despite the fears that London’s transport network would prove to be a weak link during the Olympics, Transport for London (TfL) managed to pull off a relatively hassle-free transport service for the hundreds of thousands of visitors who descended on the Olympic Park to attend the games.

Far from a weak link, London’s Overground, Underground and Docklands Light Railway (DLR) services transformed themselves into another jewel in the city’s Olympic crown.

So what was the secret behind this miraculous transformation? In the end, TfL’s achievement came down to a combination of heavy investment to increase London’s rail capacity in advance of the Olympics, and meticulous planning to deal with crowded transport flashpoints during the games themselves.

The UK Government invested around £6.5bn to improve transport services across the capital and around the Olympic Park hub. This investment went towards widespread line upgrades and new rolling stock on the Tube, the refurbishment of key stations such as Stratford and King’s Cross St Pancras, London Overground service extensions and the introduction of extra carriages on the DLR. Another important aspect of London’s Olympic rail set-up was the temporary ‘Javelin’ high-speed service, running eight trains an hour from St Pancras to Stratford.

The investment also went towards major upgrades to improve accessibility for travellers with disabilities, particularly after a House of Commons Transport Committee criticised an "astonishing" lack of provision for disabled passengers in 2006.

With the groundwork set by this extensive infrastructure overhaul, the task of running efficient transport services for record numbers of passengers was left to the city’s transport staff, which was increased by 3,500 in the run-up to the games. More than 62 million journeys were made on the Tube during the Olympics, a jump of 35% on normal levels, while numbers went up by 26% on the London Overground and more than 100% on the DLR.

"The UK Government invested around £6.5bn to improve transport services across the capital."

As the video above shows, TfL responded to this massive surge of passengers by implementing an efficient and highly reactive crowd control strategy. Anti-congestion methods included one-way systems to speed up the flow of passengers, holding passengers at station entrances to let crowds dissipate (a practice dubbed ‘pulsing’) and real-time CCTV monitoring to clear chokepoints before they could spiral out of control.

Thousands of customer service staff complemented TfL’s crowd control methods by providing a constant stream of information to the throngs of Olympic visitors and presenting a friendly face to the public. The transport network’s congenial atmosphere, coupled with the efficiency of services, impressed the majority of travellers. According to LOCOG surveys, 83% of Olympic spectators rated their journey home after an event as ‘extremely good’.

The London transport system’s transformation from rickety liability to transit powerhouse ranks as an achievement worthy of any medal-winning performance. In the aftermath of the games’ unqualified success, TfL is right to celebrate its accomplishments, and should be looking for ways to translate a little of this Olympic spirit to the day-to-day operations of a system that still occasionally creaks under the strain.

London’s already extensive railway network was made ready for the Olympic Games, hosted at 33 venues (17 for the following Paralympics) by the UK’s capital in 2012.