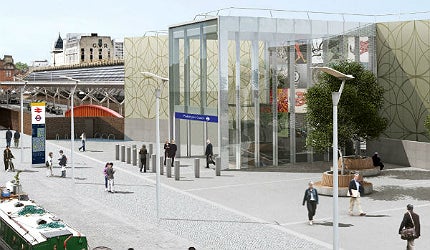 Almost exactly 150 years after the iconic train terminus at Paddington in central London, designed by Isambard Kingdom Brunel, opened its doors to 26,500 passengers a day, a new generation of architects and designers are taking inspiration from the golden age of Victorian engineering to build a Crossrail station that will serve London’s rail passengers into the next century and beyond.

The Crossrail hub at Paddington , the first station contract to be awarded as part of the £14.8bn Crossrail programme, is being constructed by Costain Skanska at a cost of £150m.

"A key element of the station design is that it is able to cater for future growth in passenger demand."

Upon its completion in 2018, the rail link will significantly reduce journey times from Paddington to the West End, the City and Docklands, with an estimated 24 trains an hour travelling between Paddington and Whitechapel during peak times.

Along with its sister stations at Bond Street, Canary Wharf, Custom House, Farringdon, Liverpool Street, Paddington , Tottenham Court Road and Whitechapel, the work at Paddington will be on a scale not seen since the Jubilee Line Extension opened in 1999.

Overseeing design at the site, a key interchange with the existing Network Rail services at the main station and with the London Underground , is Crossrail ‘s head of architecture Julian Robinson.

"I’m pleased that Crossrail is building on the positive architectural heritage of the pioneering days of London Transport," he said. "I hope Londoners will see the new stations as adding to the positive design language of London."

Around 200 million passengers will travel on Crossrail each year. The route will provide a ten percent increase to rail capacity in the capital, operating with main line size trains carrying more than 1,500 passengers in each train during peak periods and cutting journey times.

Designing stations that can cope with these sorts of passenger volumes safely and sustainably was one of the main challenges of the project, as was building on the architectural legacy of each location. Like its central section counterparts, Paddington is designed to combine the latest station technology with tried and tested engineering solutions – and a key element of the design is that it is able to cater for future growth in passenger demand.

"It’s the volume and the size that’s different from a London Underground station," says Robinson. "Perhaps the most obvious technical difference passengers will notice is the separation of the platform space – the people space – from the railway space by full height platform edge screens."

Common architectural design work across stations includes wall and floor finishes, lifts, escalators, lighting and signage suitable for use in all the new stations. This systematic approach is intended to foster a unified look in common spaces such as at platform level and maximise value for money, while allowing each station to retain its individual identity where necessary, as Robinson explains.

"We’re trying to do it so there is a sense of order to the stations, so that the below-ground passenger environment has a degree of consistency as you run through the central section, so you know you are in a Crossrail environment."

The Paddington station takes the form of an underground box measuring 260m long, 25m wide and 23m deep. The main concourse will be located between the two station entrances and their gatelines, while two banks of escalators will lead to platform-level, with one bank interconnecting with the Bakerloo Underground link at an intermediate landing. Lifts will also be provided from ground to concourse and concourse to platform-level.

A single island platform at track level for eastbound and westbound trains is separated at each end by evacuation and ventilation cores. Each core incorporates a pair of staircases, intervention lifts, tunnel draught relief and three sets of tunnel ventilation fans. Automatic platform screen doors (PEDs) extend the length of the 200m-long platforms.

Work is also ongoing on the new Hammersmith & City and Circle line station at Paddington , with the structural steel for the roof, the new taxi ramp and the canal side entrance now in place.

The steel framework has reached the full height of the new station, a significant landmark. Passengers entering the main line station are currently walking beneath the skeleton of the new entrance, a 10m-tall frame that will form the canal side glass entrance-way.

"To date, our engineers have used almost 750t of steel and poured [more than] 600m3 of concrete to construct the station structure and the taxi ramp," explains John Montgomerie, Crossrail Paddington station project manager.

"The concrete floors for the two storey station have been laid and work to construct the new concourse is underway. This involves building a new gate line, stairs and lifts as well as rooms to house operations, communications, fire and CCTV systems.

"Station ambience, safety and passenger flow will be improved when the new step-free station opens in 2013. The new concourse will ease congestion and the platforms will be extended to accommodate new, air-conditioned, seven-carriage-long trains," he adds.

To develop and test designs for Paddington and the other underground station platforms, a life-size ‘mock-up’ of a below ground Crossrail platform was built to help determine from a practical perspective whether any design modification were required ahead of station construction.

"The mock-up gives a good indication of the scale of the platform tunnels."

It is critical that Crossrail gets the internal design of stations right as the new stations have been designed to last for the next 100 years.

"The mock-up gives a good indication of the scale of the platform tunnels," says Robinson. "It is one thing looking at architects’ designs, but it is so different when you finally get to see what it physically looks like."

Created using film set design techniques to replicate the feel of actual finishes, the mock-up of the Crossrail platform section is life-sized, measuring 20m in length, ten metres in width, with a ceiling height of five metres above the platform-edge doors. It also contains a 4m-long side-tunnel entrance providing entrance and exit.

Fast track to the future: Crossrail’s vision for London

Crossrail is the largest engineering project in Europe and will deliver a high-frequency, high-capacity service to 37 stations linking Maidenhead and Heathrow in the west, to Shenfield and Abbey Wood in the east via 21km of new twin-bore tunnels.

A major vote of confidence in the UK’s private sector and in London’s stature as a centre of business excellence in an age of austerity, it will bring an additional 1.5 million people within 45 minutes commuting distance of London’s key business districts.

Personal rapid transport (PRT) – from the design team behind Ferrari

A new personal rapid transport (PRT) system from VECTUS Ltd and Pininfarina , the firm behind some of Ferrari ‘s most iconic designs, could change the travel landscape.