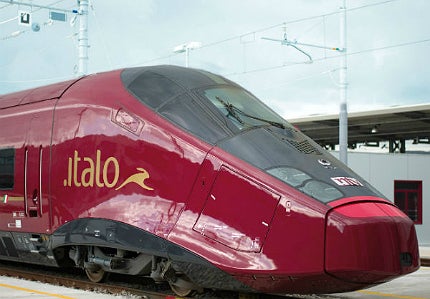 The European Union’s (EU) stated goal of developing a trans-continental high-speed rail network is fast becoming a reality, as the pronounced modal shift from road and air to rail travel gathers pace across Western Europe, fuelling a railway infrastructure boom.

Network Rail’s £37.5bn investment in the UK, French rail authority SNCF’s €4bn LGV Est Européen extension, the €1bn Y Vasca high-speed initiative in Spain – these projects and others like them are being driven by unprecedented passenger demand for new routes, increased interoperability and faster, more technologically-advanced trains boasting an array of interactive services.

Nowhere is this trend more evident than in Italy, where private operator Nuovo Trasporto Viaggiatori (NTV) has launched the country’s first high-speed train service, Italo, at a cost of €1bn.

Serving four million passengers annually, NTV’s fleet of 25 Alstom AGV trains each comprise of 11 coaches and 450 seats, running between Naples, Rome, Florence, Bologna and Milan at speeds up to 300kph. The modular design trains are equipped with Wi-Fi, live television and a 39-seat cinema car.

Impressive, but such luxuries are devalued if they come at the expense of operational imperatives, such as punctuality, reliability and safety. For that, accurate and flexible passenger rail planning is required, and in 2009 NTV selected supply chain planning and optimisation (SCP&O) specialist Quintiq to provide integrated fleet and workforce planning software.

Four years on, NTV employs the Netherlands-based company to optimise the use of all operational resources, from long-term strategic planning to real-time rescheduling and disruption management.

"Quintiq’s solution has been live since the end of 2011," says project consultant Giancarlo Broggio. "As agreed with NTV, we deliver model fixes, change requests (CRs) and second-level support on a 24/5 basis, while a third party does first level and functional support."

Broadly speaking, supply chain planning and optimisation refers to the strategic application of processes and tools – including complex mathematical modelling techniques – to ensure the optimal operation of a company or business’s manufacturing and distribution functions.

SCP&O software is a fundamental element of 21st-century rail fleet and workforce planning, where the challenge typically involves having the correct amount of resources to meet the forecasted demand. To add to the complexity, plans must also take into account industry specific employment regulations and agreements, maintenance requirements and capacity constraints.

NTV was therefore searching for a cost-effective integrated solution that encompassed these constraints and business regulations as well as, crucially, needs and preferences of its 1,000-strong workforce of ground staff and crew, as Broggio explains.

"Quintiq measured optimisation against three conflicting goals," he tells me from the company’s headquarters in ‘s-Hertogenbosch, in the Netherlands. "These were to serve the customer in terms of satisfying service level agreements (SLAs), and to guarantee punctuality, flexibility and quality of service; to optimise the efficiency of NTV’s working practices; and, finally, to take into consideration the preferences of the company’s employees.

"These three goals had to be achieved within the constraints of available resources, NTV’s business rules and also labour regulations governing working hours. NTV wanted to integrate everything into a system with high functionality, and also to optimise the use of its rolling stock and fleet."

In addition to improving customer service, maximising on-time train arrivals and boosting profitability by balancing schedules and reducing the number of empty trains, NTV had to schedule drivers with the correct route and traction knowledge, comply with safety regulations regarding rest periods, work hours and continuous driving time, as well as decrease absenteeism and staff turnover by factoring employee preferences into crew shift schedules.

In order to achieve this, NTV looked to partner with a company that offered a flexible approach, superior methodology and the capacity to support a project in the start-up phase.

"Phase one of the NTV project did not involve delivering a software solution; instead Quintiq acted as a consulting company in order to make key business decisions related to the contract, regulations and the workforce, and to decide if it was suitable to deliver a service," states Quintiq business consultant Mariagrazia Mecoli. "Beginning in 2009, we oversaw sizing and contract set-up, and deployed a small consulting team to come up with quick, smart proof-of-concept (POC) configuration.

"Phase two of the project involved the deployment of a planning solution, proper project setting according to the Quintiq Project Life Cycle (QPLC) project methodology, with phased approach in five releases from 2010-11, as well as iterative development in order to tune the model to NTV’s specific needs," she adds.

For example, if a driver is absent at short notice or a locomotive breaks down, the SCP&O software does not propagate a single solution, but instead calculates the impact on the entire employee rota or train timetable, coming up with a menu of potential solutions, as Broggio explains.

"Unit and crew planners can also interact on the system; for example, a re-publication of the unit plan is immediately visible to all crew planners, with evidence of inconsistencies, so that they can fix it quickly and efficiently, while in terms of disruption management, Quintiq’s SCP&O software provides real-time evidence of consequences, complete with constraint violations."

Using SCP&O tools, high-speed rail operators are able to plan a timetable up to a year ahead, calculate the impact of disruptions on certain routes before they happen and optimise staff, rolling stock and fleet accordingly, as well as measure operational performance against KPIs at the touch of a button.

Quintiq recently announced it is partnering with DB Schenker Rail, operator of one of Europe’s largest freight car and locomotive fleets, to integrate the firm’s rail network across the continent.

"We were looking for an integrated system capable of balancing our resources efficiently with the quality of life of our employees," said Paolo Ripa, passenger director at NTV. "This would guarantee the quality of our long-term planning and improve productivity in the long run. A few months after the project went live we began to see the results of automation, when we were able to keep promises of service and work planning we had at the start of the relationship with our staff."

How biometrics are transforming onsite time and attendance tracking

Railway construction projects have always been under considerable pressure to finish on schedule and one area that poses a particular challenge is onsite time and attendance reporting.