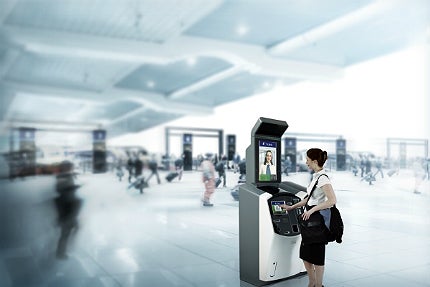 Ticketing in particular has seen rapid change in the last decade, with smartcard-based systems rapidly overtaking traditional paper tickets on many of the world’s major transport networks.

At this year’s UITP World Congress & Mobility and City Transport Exhibition in May, transport IT and services specialist Cubic Transportation Systems unveiled a ticketing concept that it hopes will lead a new wave of high-tech innovation for the transport sector. NextAgent, which the company describes as a ‘virtual’ ticket office, acts as a combination of ticket office, vending machine and call centre.

The system is designed to provide all the benefits of the traditional manned ticket office with the streamlined operational advantages of vending machines. The NextAgent vending machine is equipped with a high-definition screen that provides a video connection between the ticket purchaser and a remote ticket agent.

"When we were looking at why people use ticket windows today, versus going to the web or using their mobile or a vending machine, there are a lot of reasons why people who use the transit network every day need to speak to somebody," says Cubic’s capability development leader Dave Roat, who has been involved in the NextAgent project since the outset.

"What we’re trying to do with this device is give [passengers] more opportunity to speak to people when they want to. In that respect, we’re trying to reflect what’s happening in public transit today."

The best of both worlds

As the march of automated technology continues through our train stations, supermarkets and airports, it’s easy to forget that customers are reassured by the presence of another human being when making a purchase. A little well-placed advice goes a long way, and that’s something Cubic was determined to remember when designing its next-generation ticketing system.

"We took some information off of ATOC [Association of Train Operating Companies] and tried to find out why people visit ticket windows, we came to a stunning fact that almost one out of two transactions on National Rail is done at a ticket window in the UK," says Roat.

"Maybe they’ve got an expensive season ticket that they want to buy and they aren’t terribly comfortable putting their credit card into a machine and buying a ticket worth a few thousand pounds. And maybe they just need the reassurance of talking to a human that they’re making the right choices. We said if we’re going to build a device that complements a ticket window, we’re going to have to replicate all of the reasons why people visit a ticket window on the NextAgent."

On a technical level, replicating the ticket window experience means building an array of capabilities into the NextAgent unit. In a world of smart cards, season tickets and online purchases, a glorified printer is no longer enough.

"When you look at the face of the device, all of the functionality that is built into it is there to replicate all of those reasons why someone goes to a ticket window today," Roat says.

"I’ve got a broken ticket, for example, my magstripe doesn’t work. So the NextAgent will take a broken ticket, interrogate the ticket and find out what’s wrong with it, and display the information back to the expert on the far end, who can then correct the ticket. Those are the kinds of things that ticket vending machines don’t do today, and they’re real reasons why people need to go and speak to somebody."

Just as Cubic hopes NextAgent will merge the benefits of technology and personal interaction, the system is also intended to be as enticing for railway operators as it is for passengers.

For transport companies, which understand that removing staff contact from stations is unthinkable, NextAgent is intended as a happy middle ground. The system would allow operators to minimise staff levels at less busy stations and create centralised ticketing hubs that are dedicated to answering calls from NextAgent units. The pooling of resources and the unification of operating systems could bring with it some distinct advantages, says Roat.

"A little well-placed advice goes a long way, and that’s something Cubic was determined to remember."

"You can imagine if you’re an agent and you’ve got language skills, for example, you could log into this software and register that you speak English as well as German or French or Spanish. And if somebody approaches NextAgent and wants to speak in French, they could be connected to somebody who’s logged into that service with those language skills. So it actually helps facilitate tourist travel as well."

Alternatively, ticket agents at low-demand stations could be on-call to receive NextAgent calls at major transport hotspots. "If you’re southern and you’ve got busy stations like Victoria, Gatwick and Brighton, as well as quiet stations like Salfords, and you employ people in the quiet stations to sell tickets, there’s no reason that the NextAgent call couldn’t be answered by somebody like that, and allow that person to sell a ticket to a busier station. So we’re hoping there’s an efficiency gain to be made there, for the operators."

For passengers, Cubic’s aim is to make the vending machine end of the system as user-friendly as possible so as not to scare off more technophobic commuters.

The NextAgent unit has been designed with only a single button to start a call, with the machine’s more advanced functions controlled by the remote ticket agent. "That was our aim and our ambition – don’t intimidate people," says Roat. "Would each of our grandmothers be comfortable using this device?"

The company has also collaborated with the University of California, San Diego (UCSD) to design the acoustics of the device so that customers don’t feel they are having a public shouting match with a vending machine in the middle of a busy station. Roat describes UCSD’s acoustics lab and its research into technologies that limit sound to a particular zone, a technique that Cubic is looking to deploy for NextAgent.

When Roat’s team began developing the NextAgent idea, the introduction of video to this field seemed like a unique idea. As time has passed, however, the developers have realised they are stepping into a much broader world as video streaming capabilities become more commonplace. "It kind of feels like we thought we were being a little bit evolutionary in deploying video comms, but we seem to be keeping pace with what else is really happening out there," says Roat.

Outside of the railway sector, major banks are starting to experiment with video-enabled ATM technologies, and Munich Airport’s InfoGate system is breaking ground, with its video portals allowing travellers to get directions and basic information from staff via video connection.

Roat also mentions a similar video-enabled ticketing system currently being trialled by Deutsche Bahn in the Black Forest region of Germany. He sees DB’s system as a further illustration of the technology’s flexibility, and a demonstration that video conferencing doesn’t have to compromise local expertise.

"[DB has] deployed their version of NextAgent in five remote stations in the Black Forest," he says. "They’ve taken the ticket window staff who were there, I think there were six or seven of them, and they put them in a local, bigger station to answer the calls. So they’re still in the region, they’re still ticketing experts providing local expert ticket knowledge; they’re just combined all together in a single train station. I quite like that model, actually, because one of the reasons we built this thing, from a traveller’s perspective, is that we have quite a complex fare system here in the UK, and I think when people visit a ticket window, they really want the assurance from the local expert that they’re making the best journey for the best fare. And that requires local expertise."

With the technology starting to gain traction, Cubic will have to move fast to answer, or at least help prospective purchasers answer, the practical questions that still hang over NextAgent.

"Outside of the railway sector, major banks are starting to experiment with video-enabled ATM technologies."

For all the system’s undeniable potential, do the majority of train stations have the communications infrastructure to support non-stop video calls with the sound quality and high resolution that customers will expect? The emergence of 4G networks and the expansion of fibre-optic services make it a realistic possibility, but operators are unlikely to jump onboard unless the system’s stability is beyond doubt.

Beyond technology issues, NextAgent’s radical departure from traditional ticketing structures raises a number of operational questions for railways. The financial benefits of centralising – or distributing – ticket sales have yet to be modelled, and operators would have to think hard about staffing levels to avoid the nightmare scenario of passengers being left on hold because no agents are free to take their call.

This is the kind of situation operators will absolutely need to avoid if passengers are going to embrace a system such as NextAgent. Everyday commuters are understandably wary of changes to the established system, especially if they think technology is replacing or getting in the way of simple human interaction. Gauging passengers’ feelings on the new system is an important next step for Cubic.

"We’re going to embark on some work in North America, and parade some people past this thing and ask what they think," says Roat. "What would be your reaction? Would you be comfortable using it? So that research is yet to come, really."

Any early deployments of the technology, Roat adds, are likely to be soft – operators will want to dip their toes before diving in at the deep end.

Despite the uncertainty surrounding some of the day-to-day specifics of NextAgent, Cubic has invested heavily in its development. And in the industry, Cubic’s name alone carries weight. With more than 400 payment and IT projects carried out for transport customers around the world, the company has brand recognition and a wealth of experience to throw behind its new project.

"I guess if we’re going to bring a device like this to market, [customers] will be confident it’ll work," Roat concludes. "We’re not a company well known to the travelling public – and we kind of like it that way – but our customers know us, and they know us for building reliable devices. The gates in zone one in London, for example, have been opening and closing tens of thousands of times a day, and have done for 25 years. So there’s that heritage we’re bringing into this device."

According to the Association of Train Operating Companies (ATOC) Britain’s railways have just seen a decade of unprecedented growth, as shown by its Growth and Prosperity report.