Due to a new partnership created between the Russian Railway Research Institute (VNIIZHT) and Netherlands-based Energy Floors, Russians may be able to create a renewable energy source that can send electricity to the local grid, simply by going about their daily commute.

During a five year partnership the VNIIZHT institute and Energy Floors – a company that created the first sustainable dance floor – will work together to upscale Energy Floors’ Sustainable Energy Floor (SEF) technology for Russia’s stations and railway platforms.

This will enable the footfall on Russia’s busiest stations to be turned into electricity that can be used on site or fed to the grid.

"This will enable the footfall on Russia’s busiest stations to be turned into electricity."

Sabrina Albrecht, from the marketing and communication department of Energy Floors, said the collaboration, which was launched in June 2013, has the potential grow to a very large scale: "It can grow big, since the ambitions are high: to build innovative solutions for the transport sector at all places where there is traffic of people or vehicles."

Energy Floors’ SEF technology is an upgrade from the company’s signature invention, the Sustainable Dance Floor (SDF). The SDF uses the kinetic energy produced when people move as a source of energy that is then converted into electricity. SDF’s dance floor modules flex slightly when stepped on to create a movement that can be converted into electric power by a small internal generator.

This electricity can power the dance floor’s LED lights, giving the public an interactive experience, or be fed in to the electricity grid or power customised local systems. 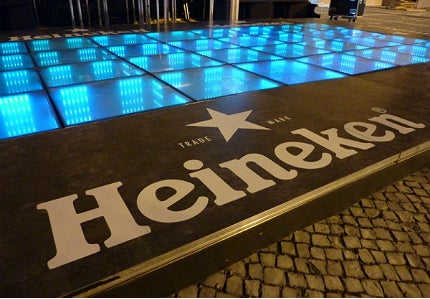 The SEF uses the same principles as the SDF but is more cost effective and more efficient for large scale applications.

Albrecht says installing the SEF tiles is quite easy as they can be connected to each other and because Energy Floors provide a standard mounting system; however, she says this can be more difficult for existing floors, like platforms at a railway.

"For existing floors of course some preparation is required to be able to build in the tiles – with a height between eight and ten cm – or we build a ramp around the Energy Floor which is easily accessible," she explains.

A pilot installation will be installed in a VNIIZHT test location later this year, where the SEF technology will be tested under strict Russian conditions.

High efficiency and potential on a global scale

According to Energy Floors, the SEF is the world’s most efficient converter of human footfall into electrical energy, with an efficiency of 50%. It is already used worldwide: in a San Francisco night club, an eco restaurant in Brazil and it has been tested on the pavements of Toulouse in France.

"The SEF uses the same principles as the SDF but is more cost effective and more efficient for large scale applications."

However, the cost-effectiveness of the product depends on a number of factors, says Albrecht: "[It depends on] the scale of the implementation, for example, the number of tiles, the type of movement and the combination with smart, low power applications."

The primary objective of the partnership, which was struck up after Energy Floors visited the institute in Moscow earlier in the year to present its technology and strategies, is to harness energy from platforms and railway stations, other applications will also be investigated, such as using the energy of vehicles – cars and trains – as a source of energy.

However, Albrecht says ownership rights will be dependent of the type of product created and determined between the institute and Energy Floors together.

In a press statement Energy Floors said it is excited about working on its technology with a "well-qualified team of researchers" from the Russian institute that already has collaborations with Siemens, Alstom, Bombardier, Talgo and Knorr-Bremse.

Although, clearly a great opportunity for the company, Albrecht says this isn’t the company’s biggest project, but they expect it to lead to similar projects, possibly in other countries.

"We expect to start similar projects in other countries in the future, but for the transport sector the Russian Railways will be our main partner," says Albrecht.

If the partnership is a success, not before long it may be a reality that commuters all across the globe will contribute a valuable renewable energy source to the local electricity grid just by going about their daily commute, increasing energy efficiency, reducing cost and creating a cleaner energy environment.

Deutsche Bahn is testing an unmanned drone as a new method of tracking and deterring Germany’s illegal graffitists.