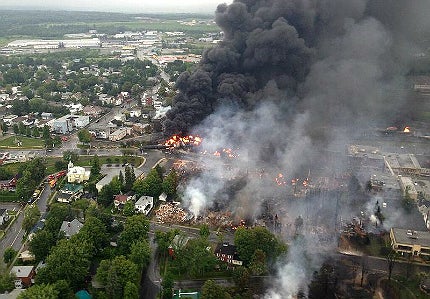 The US Federal Railroad Administration (FRA) has issued new measures for US railroads to avoid accidents similar to the derailment of a runaway train carrying crude oil at Lac-Mégantic in Canada, which killed 47 people after it exploded in July 2013.

The new emergency order (EO) includes a series of measures to be followed by all railroads operating on the general system in a bid to avoid unintentional movement of unattended trains and vehicles on mainline track or mainline siding exterior of a yard or terminal.

FRA has asked all railroads to implement the measures within the next 30 days, mainly targeting trains that transport hazardous materials such as crude oil and ethanol.

35 killed as train hits pilgrims in Indian state of Bihar

At least 35 people have been killed in the Indian state of Bihar after an express train ran over a crowd of people crossing the railroad tracks at the station in Dhamara Ghat.

Victims hit by the Rajya Rani Express were mostly Hindu pilgrims who had stepped off a local train and were crossing the tracks, near the Dhamara railway station on the Saharsa-Mansi route of the East Central Railway (ECR).

The train was on its way to Patna from Saharsa when the accident took place at around 8am local time in Bihar’s Khagaria district.

The construction costs of the UK’s proposed High Speed 2 (HS2) rail project could increase to more than £80bn, almost double the current estimated cost of £42.6bn, according to a report from the Institute of Economic Affairs (IEA).

The 1,061km national rail network, which will be built in phases, will be linked to the proposed Gulf Cooperation Council (GCC) rail system that will eventually connect all six member states.

There have been 29 companies to show interest and collect tender documents for the consultancy package, but only five consortiums submitted firm bids by the submission deadline.

Australian Prime Minister Kevin Rudd has promised to provide A$52m ($47m) to set up a rail authority to build a high-speed rail line between Sydney and Melbourne by 2035.

The high-speed rail authority will finalise rail alignment and station locations, and develop a business case for the project in collaboration with Infrastructure Australia.

The allocated amount will also enable the authority to conduct market testing to refine the project’s costs and construction timetables.

The proposed rail project, which would eventually stretch from Brisbane on Australia’s east coast to Melbourne, Sydney and Canberra, is expected to cost A$114bn ($103bn).

Elon Musk, co-founder of PayPal and the electric car firm Tesla Motors, has unveiled a new transport system called ‘Hyperloop’, which could transport passengers between Los Angeles and San Francisco in 30 minutes.

The Hyperloop concept, which involves firing frictionless, magnetically levitated pod vehicles through a near-vacuum tunnel, would be solar-powered, safe and reliable regardless of weather conditions, according to Musk.

The US-based entrepreneur said people and cars could be transported between cities inside aluminium pods at around 800mph inside elevated tubes, by using magnets and fans to shoot capsules floating on a cushion of air.

The Brazilian Government has postponed the bidding process for its BRL38bn ($16.4bn) high-speed rail project, which would link the country’s two largest cities, by at least one year.

The bidding process has been pushed back because there was only one confirmed consortium competing for the Sao Paulo-Rio de Janeiro high-speed rail project.

Brazil Transport Minister César Borges said Spanish and German groups have guaranteed they would bid for the rail project if given more time.

The Malaysian Industry-Government Group for High Technology (MIGHT) has signed a memorandum of understanding (MoU) with Thales to develop skilled manpower for the country’s rail industry.

The MoU, signed as part of a key project to establish of a Rail Centre of Excellence (RCOE), is intended to help Malaysia deal with the challenges involved in supplying skilled workers to the country’s rail industry.

As part of the public-private initiative, both parties will be responsible for the provision of specific content for the RCOE concerning signalling and communications for main lines and urban rail, including courseware, train-the-trainer programmes, project management support and facilities.

The new protoype, being trialled in revenue service under a Series 5050 EMU on the Toyoko Line, is reportedly suitable for both domestic and export markets.

The Sustina’s watertight laser-welded stainless steel body does not require painting and eliminates the need for resin-based sealants.