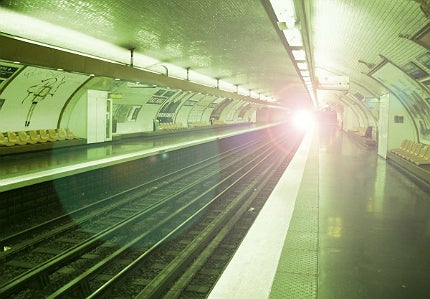 In March 2013, new research from the University of Southampton was published in Environmental Science & Technology, which raised a question mark over how safe ultrafine dust is to workers and regular travellers on the London Underground.

The Southampton team – which included the National Institute for Public Health and the Environment (RIVM) – collected ultrafine airborne dust (PM0.1) from a mainline underground station underneath an airport in Europe, as well as larger particles: coarse PM10 (which have a diameter of ten micrometres or less) and ?ne PM2.5 (which have a diameter of 2.5 micrometres or less).

"The ultrafine dust was at least as rich in metals as the larger dust particles and, therefore, taken together with their increased surface area to volume ratio, it is of potential significance in understanding the risks of working and travelling in the underground," said Matt Loxham, PhD student at the University of Southampton, and part of the study’s research team.

"These tiny dust particles have the potential to penetrate the lungs and the body more easily, posing a risk to someone’s health."

According to the researchers, while coarse dust is deposited in the conducting airways of the body (such as nasal passages and bronchi) and the fine dust is able to reach the bronchioles (smaller airways), the ultrafine dust can reach the deepest areas of the lungs and into the alveoli.

They concluded that there is evidence that ultrafine dust can evade the protective barrier lining the airways (the epithelium), and enter underlying tissue and the circulation, meaning that the toxicity of ultrafine particles may not be limited to the airways, but may involve the cardiovascular system, liver, brain and kidneys.

The Trade Union Congress (TUC) confirms in its Dust in the Workplace report that "the two most serious health problems caused by dust are cancers of the lungs, throat and nose, and other lung conditions called Chronic Obstructive Pulmonary Disease (COPD) that includes chronic bronchitis and emphysema."

A need for up-to-date advice

"The ultrafine dust can reach the deepest areas of the lungs and into the alveoli."

Despite being questioned about the new research from Southampton University, Transport for London is staunchly adamant that there is no reason to be concerned about the dust levels in the Underground.

"It is clearly wrong to attempt to draw any conclusions about London Underground from this new research that studies one station elsewhere in Europe," said Howard Collins, chief operating officer of London Underground.

"We have carried out monitoring of dust levels on the Tube for many years to re-assure our passengers and staff. This is supported by an independent report from the Institute of Occupational Medicine, which concluded tunnel dust on London Underground is highly unlikely to be dangerous."

Simon Birkett, founder and director of Clean Air in London – a not-for-profit organisation that is dedicated to decreasing the level of pollution in London and ensuring air quality laws are enforced – believes that up-to-date, relevant warnings are required to protect passengers’ and workers’ health.

"Scientific evidence is increasingly showing there are health risks from short or long-term exposure to fine airborne particles with the data strongly suggesting these effects have no threshold down to fairly low levels," he said. "The Mayor says ‘tube dust’ is ‘safe’ – an absolute word – for staff and customers, referring to workplace exposure limits and very out-of-date scientific advice."

The report from the Institute of Occupational Medicine (IOM), which was published in December 2003, was carried out in collaboration with the Universities of Aberdeen and Edinburgh.

Measurements from Holland Park station (Central Line), Hampstead station (Northern Line) and Oxford Circus station (Victoria Line) were made throughout January 2003 and samples of PM2.5, PM10 and PM3.5 were taken.

The current UK limit as controlled by COSHH (Control of Substances Hazardous to Health) – which includes dust as hazardous when present at a concentration in air equal to or greater than ten mg/m³ of inhalable dust or four mg/m³ – is calculated via a formula that takes into account the length of time that a person is exposed, so it is the equivalent of an eight-hour day. This is called the eight-hour TWA (time weighted average).

"Transport for London is staunchly adamant that there is no reason to be concerned about the dust levels in the Underground."

If any worker is exposed above these levels employers are meant to take action to remove the risk, but in 2011 the TUC produced a report, Dust in the Workplace, which stated that there is now "clear scientific evidence which suggests the current UK limits for inhalable and respirable dust of ten mg/m³ and four mg/m³ respectively should be much lower".

This view is supported by the IOM, as its press release of 5 May 2011 stated: "The current British limit values for respirable and inhalable dust (four and ten mg/m3, respectively) are unsafe and it would be prudent to reduce exposures as far below these limits as is reasonably practicable."

It then recommended: "Until safe limits are put in place, employers should aim to keep exposure to respirable dust below one mg/m3 and inhalable dust below five mg/m3".

The TUC goes on to recommend a precautionary dust standard of 2.5 mg/m³ and one mg/m³ for inhalable and respirable dust respectively.

One of the most concerning issues raised by the new research from Southampton University is that ultrafine dust (PM0.1) was at least as rich in metals as the larger dust particles and that particles of this size are currently unregulated.

"The TUC goes on to recommend a precautionary dust standard of 2.5 mg/m³ and one mg/m³ for inhalable and respirable dust."

While conclusions about London Underground’s air quality cannot be drawn from research from another underground station in Europe – Loxham says there are "large differences in airborne particle concentrations across different underground railway networks" caused by a number of different factors, such as ventilation and braking systems, wheel type and system age – the report could mean that PM0.1 particles are tested in the future.

Loxham believes the reason they are not currently regulated is due to the "relative infancy of research on the potential health effects of PM0.1 compared to PM10 and PM2.5".

He said: "In our study, although PM0.1 were the least-represented PM fraction in terms of mass, their mass concentration nonetheless exceeded World Health Organisation 24-hour limits for both PM10 and PM2.5 [24 hour average particle exposure of 50 and 25 mg/m3 for PM10 and PM2.5, respectively], while we found underground PM0.1 to be at least as rich in transition metals as PM10 and PM2.5."

While there is much previously published work suggesting the air quality in environments such as steel mills or welding plants, which are rich in airborne metals can impact negatively on health, little research has been carried into the effects of working in an underground railway station – a similarly metal-rich environment.

"Almost 1.2 billion journeys are made per year on the London Underground and the high level of mechanical activity in underground railways, along with very high temperatures, is key in the generation of this metal-rich dust," said Loxham.

"The number of people likely to be exposed means that more studies into the effects of particulate matter in the underground railway environment are needed, as well as examining how the levels of dust and duration of exposure might translate to effects on health."

For Birkett, while further research is important, what is essential is the issuing of "updated, independent monitoring and scientific advice about the potential health risks of dangerous airborne particles in the London Underground".

"We need warnings now for the most vulnerable people and action to reduce sharply levels of ‘tube dust’ for staff and the travelling public," he said.