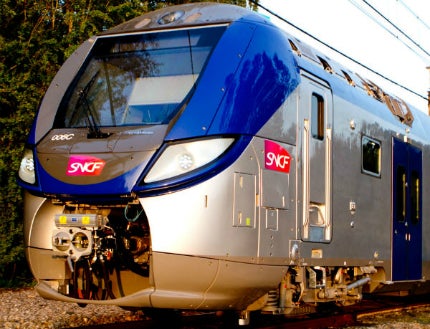 Snaking 1,700 miles through eight US states and three time zones, the railroad line linking the city of Joliet in north-east Illinois to Long Beach in southern California – part of Union Pacific’s labyrinthine route network that spreads across 23 states west of Chicago and New Orleans – is used to transfer everything from agricultural and automotive products to chemicals, coal and intermodal freight.

In September, however, locomotives working this important link in the global supply chain took on a rather more unconventional load in the shape of Arrowedge®, a new aerodynamic technology aimed at reducing fuel and locomotive emissions from double-stack intermodal freight trains.

Years in development, the employee-designed vehicle is further evidence of the global rail industry’s commitment to improving aerodynamic efficiency and investing in fuel-saving technologies.

“We are excited to see the results of this innovation in action and how it can springboard further research and development.”

Intermodal freight containers or vehicles are optimised for rail, ship and road use, eliminating the need to handle the freight itself when changing modes, resulting in economies of scale, improved security, faster transportation and reduced costs and CO2 emissions across long distances.

This means that goods from Union Pacific’s estimated 10,000 customers can be transported more effectively and the amount of locomotive power required to propel the train is reduced. Multiplied over Union Pacific’s 31,900-mile route network, one of the largest in the US, these efficiencies equate to significant fuel and emissions reductions – more exact figures will likely be released after operational trials – and ensure that trains remain the most energy-efficient way to transport bulk cargo on land.

A single Union Pacific train, for example, can replace 300 trucks, reducing emissions and stress on the US’s deteriorating road and bridge infrastructure. It should be noted, however, that greenhouse gas reductions may be offset by reduced journey times for road transport across short distances.

Aerodynamics is the study of the motion of air and its interaction with solid objects. In the context of modern, high-speed trains, this means mitigating the impact of aerodynamic drag on locomotives and rolling stock in order to save energy and fuel, while at the same time optimising operational efficiency and safety (the latter primarily focusing on stability in cross-winds and at high speeds).

Pressure pulses and waves caused by trains passing in the open air and through tunnels are the focus of widespread research. According to Professor Chris Baker, director of the Birmingham Centre for Railway Research and Education, the former phenomenon can lead to structural issues on trains themselves and on trackside structures, while the latter occurs when a train enters a tunnel, producing a preceding pressure wave that then hits the open air and bounces back toward the train.

Very high speed (VHS) trains have also been known to produce sonic booms at tunnel exits (flared tunnel entrances and exits as well as pressure relief ducts have been shown to mitigate the effects of these ‘pressure transients’). Slipstreams and wakes behind high-speed passenger trains and along the sides of freight trains can also pose a risk to waiting passengers.

The Transient Railway Aerodynamics Investigation (TRAIN) Rig belonging to the University of Birmingham – one of only three or four such rigs in the world – has been developed specifically for conducting experimental investigations into railway aerodynamics.

Vehicle models are fired at speeds of up to 80m a second through model stations or tunnels. The TRAIN rig then accurately models tunnel and open-air pressure transients and train slipstreams, and the detailed data is used to inform locomotive design.

Across the Atlantic, a team from Urbana-Champaign University in Illinois, US, is working to improve freight train aerodynamics using an automated machine vision system on BNSF Railway’s intermodal corridor from Chicago to Los Angeles.

The system captures a panoramic image of the entire train, which is used to measure and analyse the container / trailer loading pattern – including the gap lengths between them – and aerodynamic scoring.

This data is then evaluated to determine the loading efficiency of each train. The aerodynamic coefficient is also calculated so that the train’s fuel consumption can be computed by the Association of American Railroad’s Train Energy Model (TEM) software, which uses aerodynamics, weight, train handling and route characteristics to obtain an accurate estimate of train fuel usage.

This pioneering work is being mirrored in Europe in the field of passenger train design by Germany’s Bombardier Transportation. Unveiled in 2010, the company’s ZEFIRO VHS train set a new benchmark in terms of low aerodynamic drag and high stability under cross-wind conditions.

Designed using bionics – the application of biological methods in nature to the study of engineering systems – and sophisticated computer modelling techniques, the Bombardier ZEFIRO achieved an aerodynamic drag reduction of 25%, up to 15% less traction energy usage and a decrease of the wind force on the lead car equivalent to five to seven tonnes of additional ballast.

The results are impressive; the aerodynamic design of the ZEFIRO 380, one of three variations on the original design concept, generates energy savings of 20%. In September, Bombardier’s new electric multiple unit (EMU) double deck train, the OMNEO, was unveiled by French national operator SCNF.

Asia-Pacific aside, the modal shift from air freight to road, sea and rail continues, exacerbated by ongoing economic uncertainty in Europe and the US. The global air freight industry only grew at around 2.4% annually between 2001 and 2013, and has shrunk since its most recent peak in 2010.

Union Pacific claims it can move one tonne of freight 480 miles on a single gallon of diesel fuel, the equivalent of a standard mid-size car getting roughly 200 miles per gallon. Reducing aerodynamic drag and optimising fuel efficiency still further will become increasingly important if rail transport is to remain the most energy-efficient way to transport bulk cargo on land.

This trend is also reflected in the increasingly competitive and interoperable passenger rail market in Western Europe and Asia, as commuters seek cost-efficient, eco-friendly alternatives to air travel.

As VHS trains such as the Shanghai Maglev and the Harmony CRH 380A, both capable of speeds well in excess of 350kmph, become the norm, reducing aerodynamic drag in order to save energy and fuel, and optimise operational efficiency and safety, will remain a priority – and ensure that train designers and engineers continue to operate at the leading edge of technological innovation.